My recent films now have their own pages - Analogue, Living as Brothers, Too Many Inches

I edited the trailer for the 2012 Doc Now Documentary Festival, held at the Bell Lightbox and several galleries. My current film Analogue had its premiere there.

A short sizzler to introduce the revolutionary new recycled paint - Loop! Short, catchy and fun - just what they ordered!

A short motion graphics piece made using found photographs (yes, they really were under the cardboard tray in a Monopoly game) and After Effects. Audio piece is courtesy of the amazing Pajo

Bad things happen when you doze in the tub... This is a short film I wanted to shoot using lots of special effects until I realized I had no money to do so, so I shot it using the magic of stop motion. 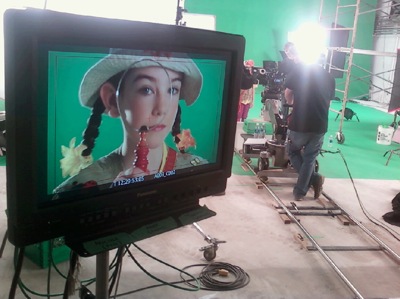 I was on set for the the pilot for a series I co-created with Joe Media - The Garden Swing. I wrote the bible as well as the pilot episode, which was shot in January 2012 in Calgary. Stay tuned for video clips.

Last year I had a full plate of writing work, I optioned my original tween series The Hush Club to Joe Media (currently in development) and also worked on season two of the YTV series Almost Naked Animals.

View more of my credits here.